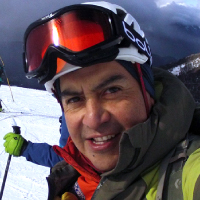 Felipe is an experienced high altitude climber and a cheerful fellow. He has been an instructor of the local Mountaineering Federation (EPAM) and a driving force of the Mountaineering Club of the Catholic University of Quito. His extensive climbing background includes most of the mountains of Ecuador with some technical routes; several 6.000 meter peaks in the rest of South America, including some expeditions to the highest peaks of Peru and Bolivia; and he has also led a few ascents in the European Alps. Felipe has completed courses in Europe with the Spanish School of Mountaineering and the French School of Guides ENSA. Felipe holds a university degree in Eco-tourism as well as a Wilderness Emergency Medical qualification as a technician given by WMI of NOLS (Wilderness Medicine Institute of NOLS) from the US. At the moment Felipe is the Director of Mingai a centre for medical outdoor training. Felipe became fully (IFMGA) certified in September 2009.