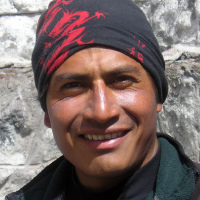 Freddy was the third Ecuadorian internationally certified mountain guide (IFMGA). He has completed his guide training at ENSA l’Ecole National de Ski et d’Alpinisme de France. Freddy was born at the foothills of Antisana volcano: As a child he started hiking and climbing around Antisana region. For many years he was the Director of the School of Mountain Guides in Ecuador, at the moment he works as one of the instructors.
During his climbing career, Freddy has led many expeditions in Ecuador and also to other countries in the southern Andes like Peru, Bolivia and Argentina. Freddy has been climbing in Ecuador for more than 25 years.