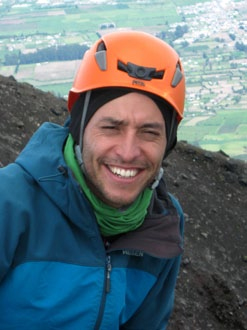 Gaspar is one of the most technically skilled guides of Ecuador. Besides climbing in Ecuador he has guided commercial trips to the highest peaks of other Andean countries such as in Peru, Bolivia, Chile and Argentina and climbed many interesting routes in the European Alps including the North Face of the Eiger. Gaspar has also guided in Elbrus. He has attended several training courses with the French School of guides ENSA from Chamonix. His enthusiasm for new routes in the mountains of Ecuador is contagious and he enjoys sharing it with others who have a similar love of wild, remote places. In April 2011 Gaspar led an American expedition to Island Peak (6.085 m) in the Himalaya. During low season he works as a horse back riding guide in the Andes. His passion for nature brought him to become an enthusiastic environmental activist. He is a internationally certified (IFMGA) guide.