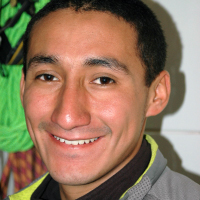 Joshua started to climb at the age of ten as a member of the San Gabriel climbing club of Quito. His first expedition outside of the country was to Peru when he was sixteen. In the twenty years of mountaineering experience he has. He has summited peaks in Peru, Argentina, Bolivia, Germany, France, Italy, Switzerland, Spain, Austria and Nepal. He is one of the few climbers who have done two ascents of the south face of Aconcagua (Argentina). As instructor, he is currently the director of the school of guides of ASEGUIM and also an international certified mountain guide (IFMGA). In November 2010 he led the first Ecuadorian ascent of Pumori in the Himalayas. He holds a B.A. in Culinary Art, so when he is not working as a guide, he enjoys spending time as a Chef. In March 2012 he summited mount Everest working as a guide for an north American expedition.